In 1992, Sedgwick Parish won a  60% grant from the Countryside Commission to rebuild the 150m stretch of stone wall on the western boundary. The British Champion Kevin Bateman put the finishing touch to the new wall.

​The wildlife Area flourished and became a much loved village amenity.
By 2015, the wildlife area has thrived - in places a little too much!

Self seeded goat willow and ash had invaded the canal bed, reducing the ligyt reaching the lower canopies. This reduced the quality of the habitat at ground level and was allowing the canal sides to be eroded. The Parish Council embarked on a woodland recovery project. They appointed a Woodland management consultant and with the help of a small grant from SLDC removed all the rogue trees, opening up the habitat again.
​Very soon the increased light levels at ground levels led to a huge improvement in habitat. Bulbs and herbacious plants recovered and the health of the area was vastly improved. The newly revived wetland near Sedgwick Hill Bridge thrived. Birdlife also increased.

Pictures following the 2016-7 conservation project, showing the improved wetland and recovery of herbacious plants and bulbs. ​ 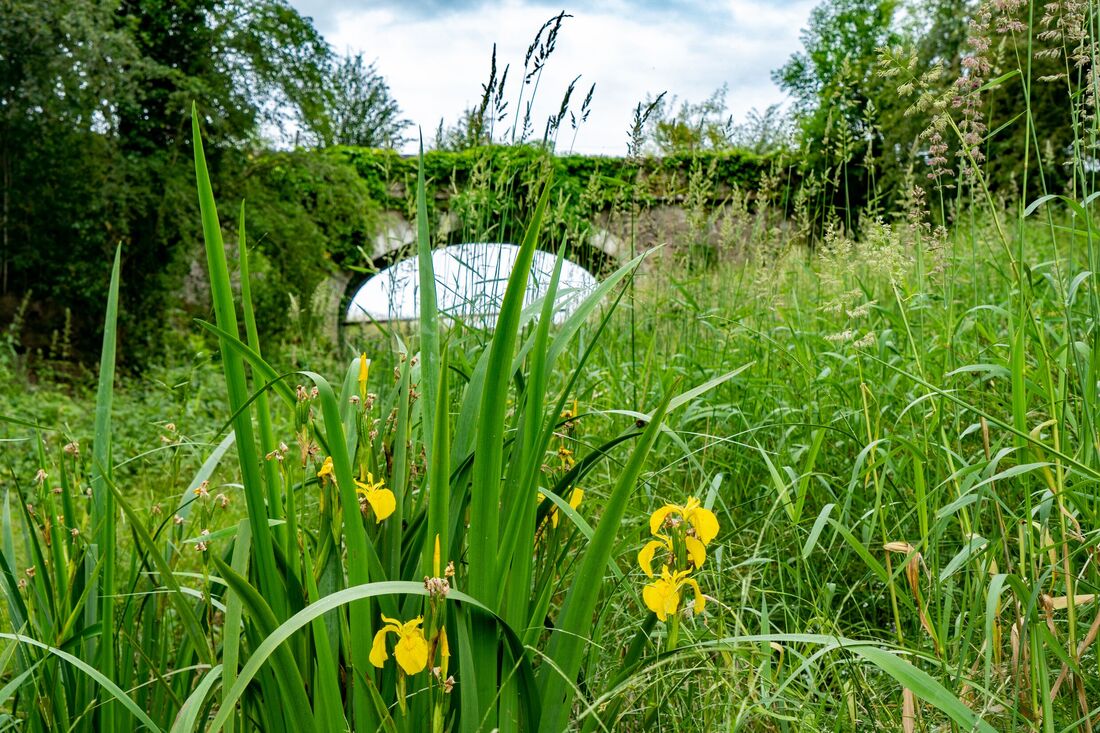 In 2016, The Stoker Seat was donated and installed at the panoramic viewing point. In 2017, a local artist painted a viewpoint guide which was installed at an information viewing table.
During this decade, woodlands all over the country were being adversely affected by Ash Die Back Disease, an unstoppable and incurable fungal disease that is slowly killing over 80% of ash trees in the UK. While some trees succomb to the diease quickly, It takes several annual cycles ofthe disease to kill others.

​Rather than simply remove all ash trees at the first signs of the disease, good habitat management involves regular surveillance and selective removal of only the worst effected trees that pose a danger to footpaths etc. In this way it is hoped that the native ash stock might develop some resistance to the fungus. The slowly dying trees can also go on contributing to the habitat for many years as the disease progresses. This is a costly and long term option!

The Canal Wildlife Area contained over 100 ash trees. During 2018 and 2019, the Parish Council surveyed and monitored the progression of the disease and in 2020 our annual survey identified trees which had to be felled, but others were left for as long as it was safe. In 2021, over 70 trees were removed. Although it was sad to lose so many trees, the previous management of the woodland meant that other species were well placed to take the growth advantage and fill any gaps.