It was at Bank House that Mary Wakefield was born, in August 1853. She was the second child but her older sister had died in infancy. Despite her ancestors not being particularly musical, her earliest memories were of being introduced to singing by the local women nurses employed as nurses by her parents   “singing a good deal by myself, between three and four years old, such songs as " Comin' thro' the Rye," " Jock o' Hazeldean," " The Lass o' Lowrie, " and many another Border ditty of like character.”
In 1858, William Wakefield built himself a country house at Prizett, near Sedgwick, where the family lived for the next 10 years. Mary's great passion for music began to be realised by her mother, and one of the incidents which brought it home to her was the child's spending half a crown of her pocket money on the purchase of a violin. After some tuition, she made her first public performance playing the violin to her father's tenants at an audit dinner. She recalled " I have had many audiences since but never one more appreciative."

She was remembered as  “a little girl bounding with health and spirits ; bubbling over with fun and the pure joy of living. Her rosy face, light brown curly hair and brilliant smile, form a picture that warms one's heart to look back upon. She was so joyous, frank and generous, and even in those early years, created an atmosphere of sunshine around her. She was free from all petty, self-centred traits of character : a truly delightful child, bright and intelligent beyond the average, and gifted with an unusual power of song and a keen musical instinct. "
Riding was one of Mary's chief joys and needlework her least favourite occupation. She received singing lessons from Mr Armstrong of Kendal.

When, in 1866, Mary's grandfather, Mr. John Wakefield, passed away after a long illness, her father became senior partner in the Kendal Bank and inherited the Sedgwick property. He immediately set to work to rebuild the house, choosing a position on higher ground, surrounded by pleasant park-like grounds, and almost facing Prizett.
In 1869, when Mary was about sixteen she was sent to a Brighton "finishing" school. Here, she was able to become immersed in a much wider range of musical experiences and had access top quality music teaching working under Mr. Kuhe for the piano and Signer Meccatti, an Italian singing teacher. It was in Brighton that she first heard the famous opera singer Patti, describing her as " a thing always to be remembered, for surely hers is the most wonderful throat in the world." She also remembered meeting  Guilio Regondi a guitar vertuoso of the early Romatic Period.​
But her passion for music was ever-growing. In 1873 she made her first proper public appearance at a local hospital charity concert; she sang two songs then much in vogue; Sullivan's " Once Again " and Virginia Gabriel's " Sad heart, now take thy rest." Everyone who remembers her singing in the early 'seventies agree that even before she was twenty she had a remarkably beautiful voice, rich, warm and seductive in quality, and exceptionally round in tone for so young a woman.

The festival's popularity quickly grew, mainly due to Mary and Agnes's dedicated work - Mary would travel, night after night, in all  weather, to visit choirs to "infuse into their members something of her own tremendous enthusiasm."  "Her personality was so charming, so captivating, she made us all do what she wanted. How the choirs loved her ! There were no rehearsals like hers."

The Wakefield Family built a hall in the village to accomodate the festival as it grew - the building is now the Village Hall.
Early in September, 1886, Mary and Marion Terry spent some weeks togetherat the Palazzo Barbaro in Venice and they were joined there by Vernon Lee.   Whilst she was there, Lee wrote and dedicated her short ghost story ‘A Wicked Voice’ (1887) to Mary. (click here to read it)  The dedication reads: ‘To M. W. In remembrance of the last song at Palazzo Barbaro, Chi ha inteso, intenda [Whoever has understood, let him understand]. The story is believed to include many references to Wakefield and her acquaintances.
Another close friendship was with John Ruskin, the leading English art critic of the Victorian era, as well as an art patron, draughtsman, watercolourist, philosopher, prominent social thinker and philanthropist, whom she had first met in 1876 in Oxford. Ruskin was a neighbour, having bought Brantwood at Coniston in 1871. He visited Sedgwick House in 1876 and began writing to Mary's mother and Mary shortly after.  Their letters shed much light on Ruskin's life. During periods of his ill health Mary visited Ruskin at Brantwood and the tone of the letters which changed from " Dear Miss Wakefield " into " My dear Mary," and  " ever your affectionate, Ruskin." demonstrates their growing friendship. They shared a love of flowers - the Wakefields even grew specimen plants for Ruskin's botanical studies and Mary was able to share her love of music with him.
Mary, continued to performed as singer all over the country, but always returned to Sedgwick, until 1889, when tragedy struck.

Her Father, William had suffered from a heart condition for the previous 8 years, but had recovered enough to participate in the local Hunt. At the end of the hunt, having dismounted his horse to catch the hare, he collapsed, dying instantly from an aneurysm . He was buried in the graveyard at Crosscrake, at  the church which the family had helped rebuild using money from Mary's first festival. Mary's brother Jacob inherited Sedgwick House and Mary moved out with her widowed mother and sisters, to another family house at Eggerslack, Grange-over-Sands.

She was now a woman in the late thirties, master - or mistress of her own destiny, and still possessed of a very fine voice. It was too late to think of a career as a concert, or operatic, singer, but her experience in many branches of music and her wish to spread the knowledge and appreciation of national melodies to the public, led her to her to come up with the then innovative idea of giving self-illustrated lecture-recitals  She began by giving a farewell lecture on the eve of leaving Sedgwick. It was a great success... " No one was more surprised," she said, " than I was myself at the popularity of it a year later."

For the next ten years, giving these lecture-recitals  became her profession. Through an agent, she offered such topics as  English National Melody, Scotch National Melodies. Irish National Melodies. Shakespeare's Songs and their Musical Settings. Songs of Four Nations (England, Scotland, Ireland, and Wales). The Songs of Schubert. The Songs of Schumann. The Song's of Handel. Madrigal Time. A " Jubilee " Lecture on Victorian Song. She also expanded the subject of English National Melody, into four exhaustive and scholarly lectures which were sub-divided into : I. The 13th, 14th, and 15th Centuries. The Monks and Minstrels. II. English Melody under Elizabeth, including contemporary settings of some of Shakespeare's Songs. III. English Melody in the i7th Century. Cavaliers and Roundheads. Two Great Song Writers. IV. English Melody in the i8th Century. Musicians and the Folk.
Meanwhile, from its small beginnings at Sedgwick House, the music festival Mary had started, had grown to become an established event on the musical calendar. Each succeeding year saw the movement further advanced as more choirs and villages joined in. The festival hosted massed choirs, which would perform some of the greatest works in the choral repertoire, and Mary encouraged the performance of the works of many contemporary composers such as Arthur Somervell (1863-1937), Jean Sibelius (1865-1957), and Samuel Coleridge-Taylor (1875-1912).

By the 6th Festival in 1891, there were 635 competitors. By 1892 it was estimated that there had been over 2,500 competitors and by the tenth anniversary festival in 1895, at least 10,200 vocalists and instrumentalists had taken part in the annual contest at Kendal. This pioneering work establishing the Wakefield Festival at Sedgwick House had also inspired an ever increasing number of similar events  all over the country and before long, a national movement had begun.  An ‘Association of Musical Competition Festivals’ was formed, which, according to the Musical Standard, spread the ‘festival movement over the whole country’. 49 other festivals set up due to Mary's lead, were held in 1904.
In 1900, Mary Wakefield retired from the role of the conductor of the festival and became its president. Its name changed from the Wakefield Festival to the Westmorland Musical Festival to prevent it being confused with the festival held in the Yorkshire town. Mary, remained active in supporting performers and by 1904 the Festival had become an event of such importance that it appointed Sir Henry Wood as its conductor and he performed alongside the Queen's Hall Orchestra offering "the dwellers in the rural districts of Westmorland" the opportunity to hear "one or two symphonic works performed in first-rate style during their Festival- week".   Wood's association continued as the Wakefield Festival grew - in the picture below he is seen conducting at the twentieth anniversary concert in 1905. ​ 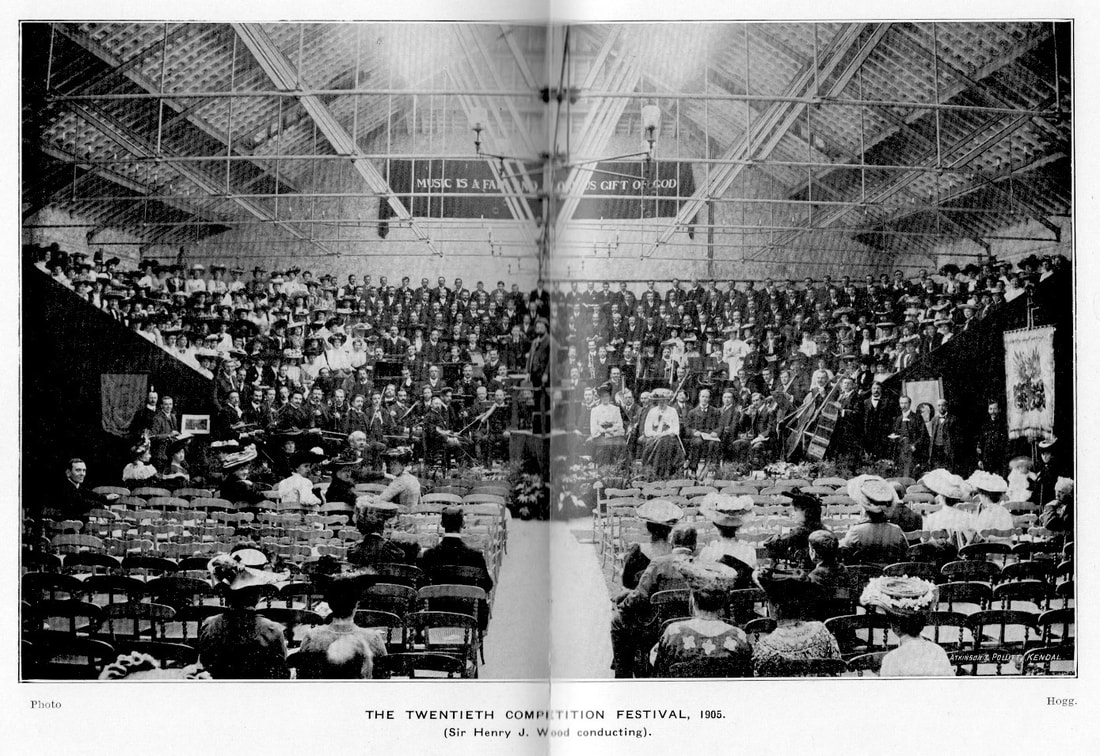 In 1903 and 1904, Mary spent long periods of time in Italy nursing Stella after a illness but returned home when her own health caused concern. She suffered from neuritus and rheumatic fever. Despite this, Mary continued to support the Festival committee and attend events. In 1906  the Festival was attended by Princess Christian, Queen Victoria's Daughter.

Over the next few years, she spent the winter months in London, enjoying the company of her friends, amongst them the composer Sibelius, and attending musical events. But during the summer, she returned to Nutwood until in 1909, her health problems forced her to stay in London where she lived in a flat in Carlisle Mansions. By the summer of 1910, she had rallied and was well enough to travel back to Nutwood where she was able to be taken around her favourite countryside and receive visits from her many friends. But by the autum her health failed for the last time and she died on Friday, September 16th, 1910.
On the following Monday she was laid to rest beside her father and mother in the little churchyard at Crosscrake, for the rebuilding of which she had sung and worked years before in the Sedgwick times. She was carried to her grave by the conductors of the various choirs belonging to the Westmorland Festival ; while representatives from each district formed the choir that took part in the funeral service.
The Festival she founded was renamed The Mary Wakefield Festival and became ever more popular - especially with children's junior choirs and young music makers.
The Festival is still held every two years in Kendal where a plaque commemorates her life and work. ​ 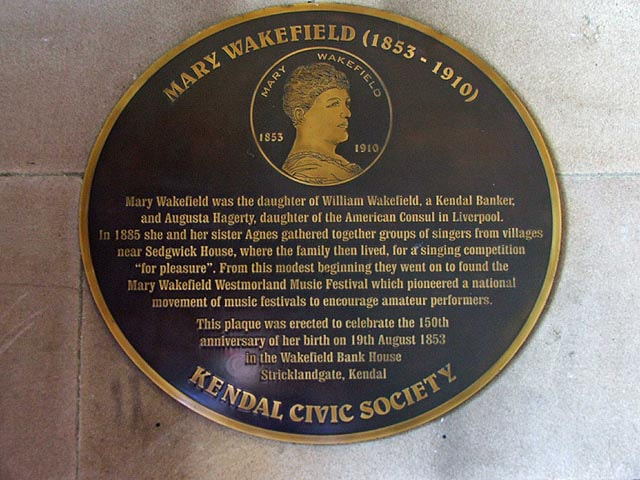