They would also carry Hay to feed the horses en route.In its prime, the canal was a busy waterway which accommodated both freight and passenger transport.

It became known as the "Black and White Canal" because boats took coal from the Lancashire Coalfields at the southern end through to Kendal in the north and then returned with limestone from the northern end, to the south.

​During the canal's industrial heyday, the horse-drawn barges would have transported cargoes of up to 70 tons of coal. They would also carry large piles of hay to feed the horses en route.

​The craft were usually run by a man and wife who lived on board in living quarters decorated with roses-and-castles artwork.
As the Canal passed through the fields, they were used at harvest time to transport hay

The canal was also well used by passengers - when it was built, the canal offered luxurious and fast travel between Preston and Kendal aboard Packet Boats. Refreshments were served during the journey. Later, to try to combat the threat to the boat services from the railways, a new fast passenger service using swift packet boats was introduced.
There were four vessels used on this service, which commenced in 1833. The first was the "Water Witch", an iron-hulled craft of a long, narrow, sleek design, with a length of 76 feet and a beam of six feet. She could carry 120 passengers, and cut the journey time between Preston and Kendal to ten hours. The other three swift boats were called Swiftsure, Swallow and Crewdson (named after the Chairman of the Canal Company, but was later renamed Water Witch II).
Later, improvements made it possible to reach Preston by fast, horse-drawn packet boat, at the speed of nine miles an hour, in only five hours at a cost of 4s.6d first and 3s.0d second class. These boats were pulled by two horses, which were changed every four or five miles at stable points along the route; the second horse was ridden by a boy postilion who would sound his horn to warn other vessels of their approach. The fast packet boats had precedence on the canal, and any boat which did not give way risked having its towing line cut.

The fast Preston to Kendal packet boat services ended on 22nd September, 1846, when the Lancaster and Carlisle railway line to Kendal opened, but some services stayed in place. 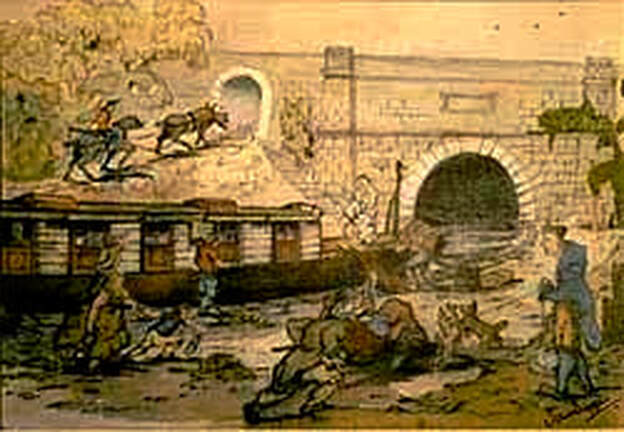 The Packet Boat prepares to enter Hincaster Tunnel - The tunnel has no towpath so the barges were hauled through by means of a rope fixed on a sidewall, or were 'legged' through by the boatmen, by pushing against the tunnel sides with their feet. The horses were led over the tunnel along the horse path on the left .
Pleasure trips were popular too - here we can see Whitsuntide Trips to Sedgwick for children in the 1890s