After his death in 1811, his son John Wakefield II (1761-1829)  succeeded him and it was his young daughter Isabella who created a separate landscaped garden on the riverbanks at Basingyll in the grounds of the gunpowder incorporating mill. John II died in 1829.
In the 1861 census (below) John Wakefield is described as being "on a journey"  but his sister and the servants and staff are shown. ​ 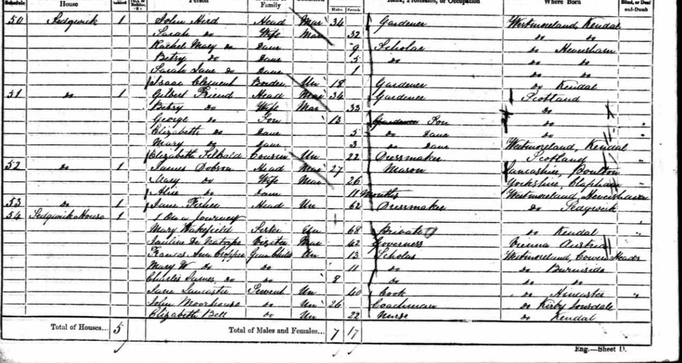 John III's  son and heir, William Henry who had grown up at Sedgwick House, was the Mayor of Kendal at the time and had married Augusta Catherine Haggarty a Liverpool Merchant's daughter and they lived in Prizett, in the family home he had built in 1858. ​
On John III's death in 1866, the family estate passed to William. He and Augusta  had 7 children, including Jacob, who would later inherit the family seat after him, William Junior, who became a first class cricketer and Mary Augusta, an enigmatic musician, author, suffragette, lecturer who pioneered rural music education and founded the Mary Wakefield Festival in Kendal. (for more about Mary Wakefield Click here and William click here).​
William also built extensively to develop the estate. The whole village became very much part of the Wakefield estate.  From the 1871 census, it is clear to see that the new Sedgwick House was at the heart of the village - most buildings in the parish had a connection to the big house either being owned by the Wakefields or a homes for their employees......

An ice house was built (and can still be seen in fields on the east side of the canal). Back Lane which originally came into the village in front of Old Row, was rebuilt along the canal embankment to free up space for the estate buildings.

The estate also included a Cricket Ground, Bowling Green and Tennis Courts. In front of the cottages opposite the postoffice, residents gathered to play quoits. ​
William Wakefield died in 1889, leaving the family seat to his 29-year old son Jacob who continued the family's influence in the village.